Summary of the year

Throughout 2011, Biocat has carried out directly or collaborated in more than eighty activities, which contributed to strengthening the life sciences sector in Catalonia and boosting its projection in international markets and in society.

The publication of the 2011 Biocat Report, presented on 26 October at an event presided over by Catalan Minister for Economy and Knowledge Andreu Mas-Colell, was a highlight of the year, for is contribution to knowledge of the Catalan biocluster.

For their public impact and high turnout, other highpoints included the organization, in June, of the Catalan delegation to BIO Washington —with 42 companies and 17 organizations— and the 2011 Biocat Forum, which in November brought together more than 450 representatives from all areas of the sector and featured noteworthy speakers like Sir Andrew Dillon, CEO of NICE (Great Britain).

Geared towards a more restricted audience, but contributing significantly to the strengthening of the sector, were another edition of the Biocapsules training program, which was held from April to June, and the fourth edition of the BioEmprenedorXXI initiative (May-November), in which fifteen entrepreneurs prepared and competed to make the best business plan. Halfway between training and networking, the technical workshops held in 2011 brought together more than 200 professionals to discuss topics like biotreatments and research with animal models.
This summary must also touch on the important and wide-reaching program of debates and conferences organized by the International Center for Scientific Debate, which in late 2011 became B·Debate-International Center for Scientific Debate Barcelona to boost the projection of its activities, which brought together —from March to December— nearly 300 speakers from twenty countries and more than 1,500 participants. The high turnout at this center’s conferences Culture and Life (CCCB) and Science in the Kitchen (Girona Casa de Cultura), geared towards the general public, highlight a growing public interest in the life sciences.

The creation of the Oncocat and Bionanomed networks, participation in the Summer School on Medicines (SSM3), in July, the kick off of the European Diagnostic Clusters Alliance (EDCA), in the middle of the year, and collaborating to organize the Medevice fair and the parallel Biomaterials Conference, in October, are other noteworthy activities in a year in which Biocat also reinforced its commitment to Europe (KIC-EIT bid, European projects and the EuroRegion). 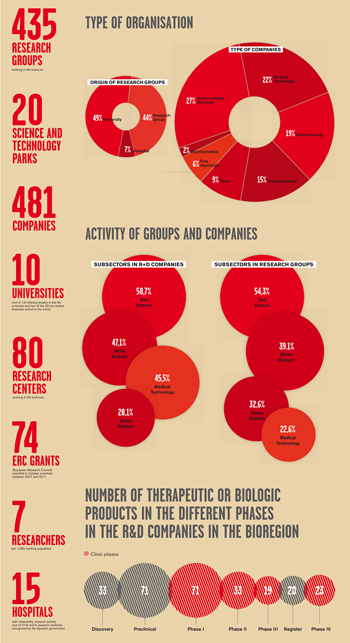